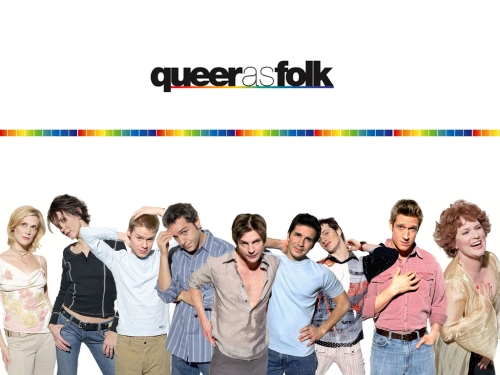 The clock struck midnight two nights ago as I pressed play on the final episode of Queer as Folk, a show that has catapulted into the ‘big leagues’ of my life. After inhaling all five seasons over a span of a couple of weeks, I was anxious about it coming to an end. Now that it has, I feel as though I’m grieving the loss of actual dear friends. Yes, they’ll live on in syndication heaven, but the narratives of their lives have ended, and short of revisiting my pastime of fan-fiction writing, there’s nothing I can do.

This show combined my love of ensemble friendships and phenomenal characters with my passion for gay rights. It first aired on Showtime in 2000, and revolves around a group of friends living in Pittsburgh. Their lives are not unlike yours or mine – they love, laugh, hurt, work, and play. But they’re queer, and that aspect of their identities colors their lives and a lot of their unique experiences. They spend many of their days at the local gay club, Babylon, and socialize over lunch at the Liberty Diner. Some of them are active for the plight of equality, while others are initially more indifferent to politics and try to live their lives without asking permission. Some let their homosexuality light up their lives like a candle burning bright, while others attempt to blend in to mainstream society and hide who they are. Each of the characters is a gem, and I’m so glad that my good friend Rach suggested I watch!

As I mentioned before, the lives of these genuine characters are very much like ours – yet often the media strives to

neuter gay life. In a sense, the idea of gay lifestyles is more acceptable in the present day, but the realistic expression of gay sexuality is swept under the rug for fear of offending straight people. They’re eunuchs in a way – it seems the only time they’re sanctioned in the mainstream society is when they’re giving style tips. It’s unfair, and I’m glad this show addressed that. Whereas most broadcast networks make gay kissing out to be a milestone of epic proportions (i.e. the nonexistent liplocking on Modern Family), the characters of Queer have sex in a realistic way within their relationships. This is not to say that I support crudeness, necessarily, I’m just voicing my appreciation for the show’s honest portrayal of gay lives.

Once I finished the last episode, I naturally found my way to YouTube, where I spent about another other in the middle of the night watching interviews. One notable interview was when the entire cast appeared on Larry King Live in 2002. What I found disturbing was that King kept repeatedly establishing which of the actors were gay “in real life”, and which were straight. He asked awkward questions about kissing people of the same sex, and then even asked the straight actors whether they regretted taking the part. Granted, this was eight years ago, but I felt like he missed the whole point of the show – who cares how you identify yourself, as long as you can relate to the humanity of the characters? We’re all the same, and as Debbie (more about her soon) said on the show, “genitalia is just God’s way of accessorizing.”

My absolute favorite enigma of a character on the show is Brian Kinney. Played by the sultry, gorgeous Gale Harold, Brian has one thing on his mind and one thing only: sex. At 29, he’s a brilliant advertising exec with a keen fashion sense. The plot thickens when he meets a high school senior and budding artist named Justin Taylor (Randy Harrison), who’s a rookie to the gay scene. As you can imagine, Justin falls head over heels for Brian – but Brian builds a tough exterior, the kind that detests relationships and love, much less marriage. 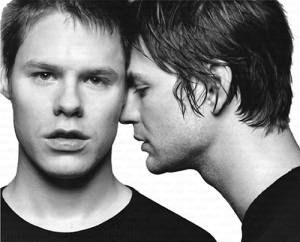 Yet it’s clear to everyone around him that Brian adores and loves Justin, and the two have a magnetic connection. It’s the subtle things that Brian does that show just how fragile and loving he is. When Justin is the victim of a hate crime at his school prom, Brian spends every day in the hospital with him. I can literally go on for pages and pages about my love for Brian, but I’ll leave some of the suspense alive in case you decide to check it out. 🙂

Here’s one of my favorite scenes from Season 1, where Brian surprises Justin and shows up at his prom.

END_OF_DOCUMENT_TOKEN_TO_BE_REPLACED

Rumors have been flying for a while now, but the death of ABC’s Ugly Betty still manages to pack a punch. I wouldn’t say I’ve ever waited anxiously for each episode, and I often caught up online, but the show had a very natural ability to cheer me up with it’s hallucinogenic colors and off-the-walls characters. Based off of a bunch of telenovellas, Ugly Betty brought us a first-generation college grad who’s journalism degree brought her to Mode Publications – as an assistant to a fashion magazine editor. In a true telenovella manner, the plot abounded with outrageous scandal upon outrageous scandal. But, I think the underlying themes of the show were those of family, support, and an acceptance of the “other” – be it latina girls with a healthy body image & yet lack of fashion sense, vixens who’ll do anything to get on top, self-serving receptionists with occasional heart, and guys who treat their sexuality as normative and just another facet into their identity. In a way, Ugly Betty paved the way for Glee, I would say. Betty’s nephew, Justin, made it mod to appreciate fashion, musicals, and theater. I’m going to miss all of their personalities; I’ll miss Daniel, who changed so much from playboy to grieving husband. I’ll miss the colors of the show, and the fierce writing that will live on in syndication. I’ll miss Betty’s innocence and her journey to find a niche for herself in the writing world!